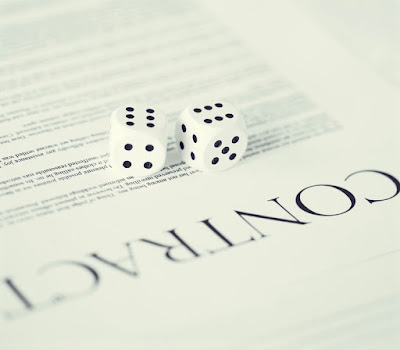 I have a confession: I'm an office-supply-store junkie. I love to browse the shelves brimming with multi-colored pens, pencils, file folders, legal pads, rubber bands, and paper clips. (Yes, paper clips - the gold ones are especially snazzy!) And I love the snacks that you can buy in bulk, especially Twizzlers. Because if you brought that decorative low-fat snack back to your office, your colleagues would praise you for giving them something tasty that also satisfies the common urge to relieve stress by chewing things.

But there's a dark side to office supply stores: they sell form contracts. The fill-in-the-blank, "one-size-fits-all" kind. (The General Agreement is my Bizarro-World favorite; then again, as Shakespeare said, "What's in a Name?")

There are several reasons why using off-the-shelf legal form contracts is ill-advised:

2.  What about the form contract's relationship to other legal documents? The form likely refers to other legal documents, and it's too easy for a non-lawyer to ignore those or fail to understand how they should relate to the principal form. For example, many professional services form agreements refer to a statement of work ("SOW") that should be attached to the agreement, but what if the SOW conflicts with the agreement in some way? In some cases, the SOW should control; in others, the agreement should take precedence. There's no way that an untrained person can decide which document should control.

3. The form contract doesn't consider your business culture. In my legal practice, I try to understand my client's business culture, including their appetite for risk - and their available insurance coverage. But it's impossible for the author of a form agreement to draft it with these considerations in mind. For example, your management might prefer mandatory arbitration of disputes arising from the agreement rather than litigation. The form may not reflect your management's position on this and other areas where business preferences intersect with legal terms, such as provisions excluding certain damages and limiting liability.

For these reasons, if you use form contracts, you're rolling the dice on whether they will accomplish your legal - and business - purpose. So don't use them!