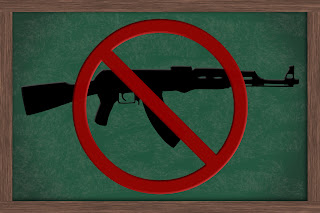 As reported by The Washington Post, business-software giant Salesforce recently instituted a policy barring its retailer customers from using its technology to sell semi-automatic weapons, including the AR-15 used in numerous mass shootings. One such customer is Camping World, whose Gander Outdoors division sells many "AR" and other semi-automatic rifles.

Salesforce wants to force Camping World/Gander to make a major change to its business model via an addition to their AUP that is irrelevant to their customer's licensed use of Salesforce software. And although sneaky, I bet that the Salesforce master software license agreement contains the customer's promise to follow their AUP "as Salesforce may amend it from time to time." Which brings us to the question of why Camping World/Gander is continuing to sell semi-automatic weapons to this day, apparently in violation of the Salesforce AUP. (Hey Salesforce and Camping World executives out there, what's the deal?) Doesn't Salesforce worry that if they don't enforce this provision in their AUP, they may be estopped from enforcing it in the future? I'd certainly worry about that!

The tactic of forcing business behavior changes (arguably for the greater good) through buried contract provisions is worth considering. To a large extent, Salesforce is acting to ban assault rifles because Congress and the courts have failed to do so, thanks to the Second Amendment. (Could the Founding Fathers have foreseen the ruthless killing efficiency of a semi-automatic rifle  - or that just about any goofball can buy one?) As a tool to effect a noble purpose, I admire Salesforce's creative contracting.

But what I can't get over is Salesforce using its considerable business leverage on a valued customer to change their business model without prior discussions. And doing it with a "fine print" mandatory - and arguably irrelevant - contract provision (rising to the level of a "gotcha") is repugnant to me. That's not how reasonable persons should conduct business.

Are you game for the Salesforce approach to banning semi-automatic rifles (and the other nasties listed in their AUP)? Or (regardless of your feelings about the Second Amendment), do your sympathies lie with Camping World? Reasonable minds may differ!